Ok, this is a quick wine recommendation.  I know that a lot of my friends have wives.  Those wives like to drink white wine.  Those same friends don’t know anything at all about white wine.  So, I’m going to make it easy for you.  Go to your local bottle shop and pick up a bottle of this Lolo Albarino (al-baa-ree-nyo), take it to her, open it, pour her a glass and watch what happens.  She will be stoked and you will be a hero.  When she asks you about it, you can tell her it’s from Rías Baixas (ree-ahs buy-shuss), which is a region in Galicia, located in northwest Spain. It is a gorgeous, lush and green area along the Atlantic seacoast, directly above Portugal.  Tell her if she plays her cards right you will take her there someday.  If she doesn’t respond to that, then you are in serious trouble, you better start checking her texts.  Most likely you will need a can of bear mace to keep her off of you after this though.  You’re welcome!

Tasting notes: Clean, bright straw yellow with green highlights. Neat and fragrant on the nose, with intense floral and herbaceous notes, and hints of ripe fruit flavors. This wine is dry with good balance and a refreshing acidity which shows varietal character. Very healthy feel in the mouth with a long, clean, lingering finish.

this is a winner!

Ok, so I’m not letting anyone in on a big secret here, this is more of a reminder that sausage and beer go great together.  Last week I attended Happy Hour at Encinitas Ale House, here in Encinitas, right on the 101. If you haven’t been there, you should go.  It’s right where Oly-O’s used to be, by that weird Bead Store.  This place is a beer lover’s Nirvana!  So many great local and imported beers on tap, you can’t even decide what to get.  Really good “bar food”, and a fun afternoon atmosphere (I’m sure night time is just as much fun).

So I started out with the previous week’s favorite, Ale Smith IPA (I really dig this beer).  Of course they had it on tap.  I had a couple of those, I won’t lie. Then I moved over to another San Diego gem, the Green Flash Brewing Co.  I had a pint of the Hamilton’s 6th Anniversary IPA at the bar guy’s recommendation.  86 on Beer Advocate, this one is good, especially if you like citrus fruit.  My buddy Chris would be all about this beer.  It has the familiar hops and bitterness of the usual IPAs, but also a distinct citrus taste that I found pleasant on this sunny Wednesday afternoon.  It made me hungry so ordered a sausage plate (and another Ale Smith).  The sausages were grilled to perfection and served with this really tasty red sauce.  As soon as I tried it, I realized that Germany is really on to something with the sausage and beer combo plate.  This is, hands down, the best food to eat while drinking beer.  The combination of pork fat and malted hops makes you feel like you died and are joining Odin and Thor at their table in Valhalla.  To round things out, I went for the knockout punch, the  15th Anniversary Escondidian Imperial Black IPA from Stone Brewing Co.  Holy shit…is all I can say about this beer.  94 on Beer Advocate, it tasted like a handful of hops and another handful of black licorice.  10.8% ABV, that’s what I said, 10.8% ABV, but I couldn’t even tell until I got up to go to the bathroom and almost fell down (of course, I had been there for two hours by then).  Overall, a very tasty beer that packs one hell of a punch.  To summarize, go to Encinitas Ale House, try some beers (they do tasters), order the sausage plate and enjoy the ride.  You will be glad you did, I promise.

Where the magic happens 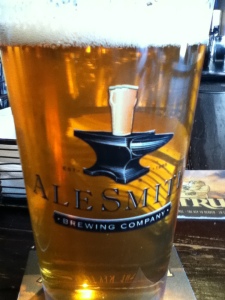 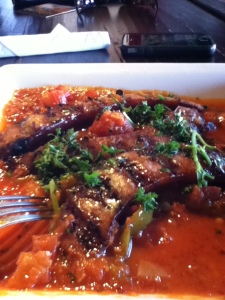 I’m kicking things off tonight with my new favorite beer:

AleSmith IPA. I’m going to honest here. IPA is usually not my favorite style of beer. I’m learning to like it because it is so prevalent in San Diego and because it seems like the “in thing” right now, but I typically go for a more malty brew like Porter or Stout. I’ve tried a few IPA’s recently like the Ballast Point Sculpin, the Racer 5 from Bear Republic and a few others which I really liked including the ultra perfumy “Enjoy By” from Stone. These beers usually taste like you just took a bite out of a pine tree air freshener and washed it down with a shot of vodka. On the plus side, they pack a mean buzz because they are usually 7+% alcohol, which is high compared to say a Bud Light at 4%. The AleSmith IPA is also hop-heavy, but it also has a decent amount of malt to balance it out. It is really tasty and it doesn’t leave a perfumy aftertaste. It’s kind of bitter on the back end, which I like. It’s highly rated on Beer Advocate (95 out of 100) and it is less pricy than just about anything else coming out of San Diego (it’s about $6 for a 22oz.) Try finding Pliney the Younger for that price. Actually, try finding Pliney the Younger period.

I am a 38 year old dad. I live in Encinitas and I like to cook. I also like to eat and drink. It occurred to me one day that a lot of other guys I know, single dudes, married guys and other dads, also like these things, but there aren’t very many places they can go to chew the fat about food and/or wine that aren’t geared towards middle aged women or Project Runway finalists. There are a few good websites devoted to beer, but they are mostly for guys that collect medieval swords and play WoWC. I think we need something  that is aimed at our people – thirty-something man-boys with limited domestic skills, drug/alcohol problems and A-D-D. I’ve also finally come to the realization that my wife doesn’t give a shit about a really good local IPA with a superb hops to malt ratio and a dry finish, but I do, and I need to talk to someone about it dammit! So, I thought it might be good therapy to start a blog…or a Flog if you wish, where I can share my experiences and views on food, wine, beer and other interesting shit and give others the opportunity to do the same. I hope you like it.